Review of “Sketches of a Fractured Song” 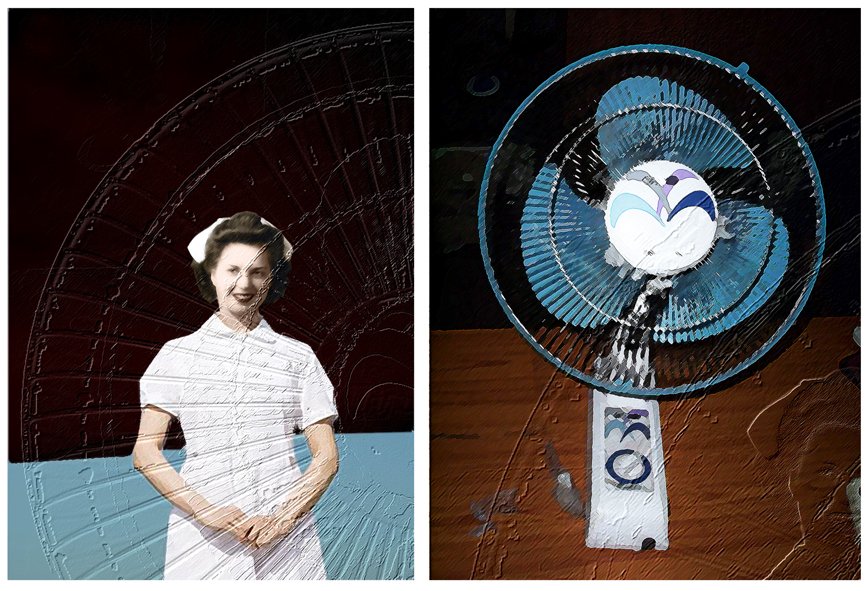 Picture this: Sketches of a Fractured Song

Hospital wards are the grim locus of Malekeh Nayiny’s latest work, a series of 14 digitally transposed prints that attempt to see these institutions as places of catharsis and salvation as much as death and sickness.
Her central figures, the omnipresent nurses who haunt these works, are at once bringers of comfort, and spectral harbingers of foreboding. They are both agents of mercy and angels of death.
“My father was a doctor, and I grew up in that world,” says the Paris-based Iranian artist. “But after a dear friend fell sick, I found myself spending time in hospitals all over again.”
Her nurses strike an off-key note, despite the ethereal quality of their surroundings. Their presence is unsettling. They are tainted by what they work in, touched by the suffering of those they tend to. Death and grief hover where they go.
“I was searching through old hospital archives from the 1950s and 1960s,” says Nayiny. “I came across these beautiful photos. I don’t know what attracted me, but I found them very haunting.”
The dated quality gives the images a modish edge. There’s something of Edward Hopper in the way these modern-world figures are frozen in time and captured in sinister isolation.
Sepia hues evoke a vanished era. You can see it in the nurses’ uniforms, the spartan wards they inhabit, and the aluminium sickbeds that are a staple feature.
Whether arrayed for vaguely stilted, school yearbook-style photos, or captured alone for seated portraits, these are anguished muses, and inhabit a chaste and remote oasis. Even the odd, passing smile is discomfiting. Other figures, their faces obscured by masks, strike a darker note. The general mood is uneasy.
“Some people found the effect disturbing, I’m not sure I meant it that way,” she says.
The prevalent suffering is imbued with a religious quality, foregrounded by the Red Cross insignia on their armbands, and the cloistered milieu, with figures set amid the pastoral grounds of colleges, or sequestered like nuns, it’s hard to tell.
Pastel shades enhance the effect, with liberal use of the kind of anodyne baby blues and pinks so prevalent in hospitals. The pseudo-infantile spectrums of industrial wallpaper capture the sanitary character of the ward, the way the comfort it strives for is belied by a soulless reality. Recurring images of fans convey a bizarre, disquieting sense of the time spent in hospitals, which is time apart, set to a constant whirring hum. “I’d had the image of fans on my mind for some time,” she says. “I wanted to juxtapose that with images of nurses.”
And the fans have repercussions on her figures, with their reverberating airwaves depicted in schematic terms, echoing on to the scene like shockwaves. Elsewhere the effect is more a ripple, or a shattering of glass, in images rattled by the impact.
The resonance is heightened by the poor image quality, with faces occluded, their definition bleary. “I used low resolution images to achieve a kind of distortion,” she explains. “I like the blurring effect they gain.”
The filtering technique means some of the work approaches a kind of abstraction, with images warped by the chromatic screening.
These are experimental works, and mark a new departure after the intimacy of Nayiny’s earlier family portraits, or subsequent photographs of the French Romany community, shot through with mordant humour.
Here the vision is darker. She is entering a more sinister territory, and one more unnerving.